How the jollification gave us unity, strength & endurance

In the mid-1940s, the jollification was the way how Anguillians managed to build their homes and rock walls around them; clear and cultivate large tracts of land; and, accomplish anything of any real significance. Generations before had used it effectively. It had been born out of necessity during the dark and difficult years of slavery.

Yes, Anguilla also experienced slavery; but, the hardship of living on The Rock – as the island was called because of persistent drought, poor harvests and famine – caused the all-so distressed plantation owners to become emphatic; and, thus, less demanding; also, increasingly absentee. Eventually, plantations were left in the care of clear complexioned slave drivers who, over the course of time, sold off parcels of land; gave some to family members; and, passed down the rest.

Ever since British colonists brought tribal African people to the island – following its colonisation from St. Christopher (St. Kitts) in 1650 – slaves had been helping each other cultivate their own plots of land during their free time. So, throughout the ages, with little money and big personal and family dreams, the jollification was the ideal vehicle for the poor. In reality, it was the mechanism the new landowners copied, perfected and used on a grand scale in their struggle to achieve both continuing profitability and financial self-sustainability.

With slavery virtually ending early in Anguilla (way before 1834, the year of the emancipation); and, caretakers not being able to hire former slaves, the jollification took on its new form which was passed on. Generations upon generations used it to good effect – to clear and prepare parcels of land for cultivation; to build homes; and, to accomplish other essential things to enhance the quality of life and living.

Jollification had become an integral part of our culture. There was nothing demeaning to rounding up a group of people who would work as a team; and, be treated to food and drink in exchange for their time, labour and sweat. It was quite customary and a welcomed thing to hear about an upcoming jollification; and, automatically turn up, in great numbers, ready to work.

Some of the Welches Fest founding members were born into the jollification culture and environment; and, from their earliest recollection, they had to love seeing the action play out vividly before their very eyes as a real-life drama.

To work acres of land in a day…

In essence, jollifications were like plays – put on periodically in the various villages throughout the island – with virtually the same casts and music most of the time, just with different centre stages and backdrops. Imagine a placid pond, filled with birds in the background; and, grape and other trees lining the other two sides of the tract of land. What a most beautiful vista, bound to create an unforgettable memory! Add to it a set of men working in tandem, hoeing a large tract of land while chanting; and, womenfolk close behind, bending slightly, sowing seeds in the softened, baled up soil. Breathe in the pervading smell of freshly hoed up earth!

That was the scene on centre stage. On the sidelines, more women in long dresses – their heads tied with colourful cloths – sweating over wood fires, cooking and baking feverishly; while, barefoot children ran back and forth carrying water or bundles of wood. In those days, for most, it was not money that made the mare walk. Rather, it was the anticipation of the jollification itself, more than the actual food and drink that were provided and consumed.

Cooking at the jollification was itself a big event in the overall production. Just imagine… For breakfast, there was the bustle baking johnnycakes, frying cakes and fish and boiling bush tea. Sometimes, making cassava cakes the size of a medium pizza on flat iron slabs. All washed down with a big enamel cup or half a calabash of tea made from local herbs – balsam, soursop, stingy weed; regular coffee or the more common and popular that was brewed from parched beans or okra seeds, hand ground using small, home cast iron mills.

For lunch, there was peas and rice, with goat or sheep meat or pork or fish, cooked over wood fires in large five to eight gallon kerosene pans; also, pea or bean soup with sweet potatoes, sweet gourd, pumpkin and tripe; along with flour or guinea corn dumplings; and, the always in demand, johnnycakes! It was like a Hollywood filming session with water breaks and alcohol breaks! So spectacular! At least, to the very young and impressionable children.

The blowing of a conch shell signaled the beginning of a break. Automatically, all hoeing ceased, the men laying down their implements in unison; and, the women sticking their wooden or iron planting sticks into the earth from whence to continue planting the seeds, after the conch shell blew again to signal the resumption.

…and build most Anguillian homes

It was not quite that way on a construction site. A conch shell would not be blown. Instead, the mother, girlfriend, wife or some female relative or friend would make the call as to when the workers should stop to eat. At times, work would continue to enable the mixed concrete to be used up, even if it would not have gotten hard by resumption time.

Welches Fest encapsulates the spirit and essence of the old time jollification. Recreating an old time village-like atmosphere in 2008 turned out to be hugely successful. The organizers listened to the multitude of persons who begged that it continue; and, be open to all residents and visitors alike. So, it has come to pass that, over the years, that Welches Fest has grown beyond all expectation.

The adults go to enjoy the food, the camaraderie, the show, the scratch band and other music and the dancing. The youth go to see and play with the old time toys; play with their friends; eat barbeque chicken and ribs; and, run up and down the place, having a ball. Visitors go to sample the old time offerings; and, generally, to be awed.

Recreating the Jollification at Welches Fest

Welches Fest debuted in 2008 strictly as a “one-off”, “giving back to the community” function by a small prominent and successful group of persons who felt that they should treat their fellow villagers to an old time cultural fest in the form of food, drink, dance, dress, music, toys, game, utensils and the works.

The noble idea was hatched by a few; but, it could only be executed with the help of a whole lot of volunteers from the village itself; for, it was designed to be an in-village event only. What better day to put on this totally free showcase, they thought, than on Whit Monday on which the Anglican Church, in the olden days, kept its grand bazaar on Burrowes Park (now James Ronald Webster Park) in the Valley.

The objective was to try to recapture as much as possible of the bazaar itself; for, the elderly would be able to reminisce; and, the youth would get a glimpse, a taste and an idea of what life in the olden days was like. And, so it was that they resorted to the tried and proven old time jollification which was, by nature, a “moveable feast”, this being the historical meaning for Whit Monday.

Tags:BookFoodWhat We Do In Anguilla 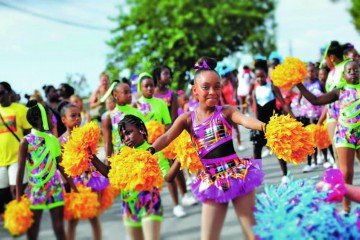