History supplies us with answers to questions; thus, a brief history of Anguilla is considered essential, if we are to fully understand and appreciate how Anguilla Day came about; and, how the island has been affected ever since. Today, many know May 30th to be the public holiday on Anguilla with a ceremony on the James Ronald Webster Park and the Round-the-Island Anguilla Day Boat Race but are unaware of the circumstances surrounding this day.

Anguilla was settled by British colonists from St. Kitts in 1650; but, it was not colonized by Britain; and, in the late 1600s, Governors-in-Chief for the British colonies in the region stated that the island was “not worth keeping”; that it was “a barren, rocky island, ill-settled; and, of small consequence”; only “fit for little but goats”.

Occupying Anguilla by such time were the descendants of the British settlers from St. Kitts; the Wild Irish who landed there in 1668; and, the slaves who came before them.

In 1701, the Governor-in-Chief for the other British Caribbean colonies said about the islanders, “The men… are perfect outlaws”; and, have “a propensity for smuggling”. In 1709, he added, “The people lived there like savages without order or government”; and, they claimed to be Christians because “they were descended from Christians”.

A country of perfect outlaws

It had been predicted that the poor living conditions would basically remain the same for a full 250 years. Such a prediction was accurate; for, Anguilla continued to be a place where only the hardiest of people could survive. With Britain not officially recognising or administering the island, Anguillians did what was needed to survive under the harsh conditions.

In 1825, Britain finally recognised the island as a colony; and, sent a Chief Magistrate to administer it. The islanders were very vocal against the new arrangement; and, petitioned Britain; but, it was to no avail.

In 1871, Anguilla and its 2,800 residents were forced under St. Kitts’ direct administration; and, came under the control of a magistrate from 1882.

Soon after, in 1888, the island was hit by a severe drought and famine which lasted throughout most of the 1890s. Though Anguillians were urged to leave, they defied even nature to remain on the “barren, rocky island, ill-settled; and, of small consequence”.

Anguilla in the 1900s was still largely pioneer country. Life and living was still largely a case of an ongoing daily struggle for self-survival; with residents ignoring any law and order that might be imposed on them; and, living with a strong sense of impunity.

The plantocracy government of St. Kitts was never in favour of (either directly or indirectly) administering Anguilla and was not keen on spending its money to govern it. To make the island financially self-reliant, it imposed high fees and Customs duties; and, sent in gendarme-like police officers not so much to enforce the law; but, to ensure that all monies owed would be duly collected.

Conditions for so few police to be that effective were not that helpful; especially, considering that the residents continued to live largely in the manner that they had inherited, that is, to survive under harsh conditions.

In this prevailing atmosphere of persistent conflict between Anguillians and a largely imported police force, residents never saw the police as being there to serve and protect them or their interests; but, just as a force that existed, instead, to hinder them and to frustrate their efforts to eke out a living; thus, in going about their daily lives, they ignored the Magistrate’s men who, nevertheless, made it their duty to bring offenders and the suspected to justice.

There was methodology in everything; even in the way the police interacted with the people who generally saw them as antagonists and upholders of laws that were imposed on them by the distant and uncaring central government based in Basseterre, St. Kitts.

In truth, those who serve and protect us should be respected and aided; but, never feared. This, however, was not the case. No people like to be hounded; or, entrapped or victimised. Too many Anguillians felt that that was exactly what the police were doing to them.

The warden of an entire island

Anguilla had gone from being ruled by a resident, locally elected Deputy Governor from 1660 to a Chief Magistrate sent in by Britain in 1842. Then, for a full century, it had absolutely no say in its own administration. Finally, in 1943, the island was allowed to send one representative only – the first being a Mr. Walter Hodge – to sit in the legislature in St. Kitts.

On the books only, the island got a greater say in its administration in 1951; but, there was still only the one representative with no additional say. Direct rule from St. Kitts occurred from 1956 when the Presidency became a colony; but, the token democracy continued. The real authority in Anguilla continued to be a Magistrate who, in the 1940s, doubled as a doctor while being in charge of the police.

The Warden’s Place – an old plantation building, built in the late 1780s – was the residence of the Chief Magistrate who was referred to as the Warden. In reality, Anguillians were prisoners in their own homeland; and, were controlled by a British warden – one very powerful man backed up by half dozen or so police who struck terror in the hearts of good people struggling to survive.

A people against a Central Government

The hardships the people faced were exacerbated after Robert Bradshaw became Chief Minister of St. Kitts-Nevis-Anguilla.  He had solicited the support of the islanders to vote for his party’s candidate in Anguilla. When they refused, it is sad, he made threatening statements that he promised to put into effect should his party win the elections and form the new central government. Some of those alleged statements are:

“I will not rest until I have reduced that place to a desert.”

“I will put salt in their coffee, bones in their rice and sand in their sugar.”

“I will put bones in their rice and pepper in their soup.”

His party was successful in its bid to win the general elections; and, to form the central government of St. Christopher-Nevis-Anguilla; and, true to his word, he became very vengeful, holding back financial aid and requisite infrastructure for the island.

Britain was in the process of getting rid of her colonies; so, on the demise of the West Indian Federation (1958-62), she allowed the bigger islands in the region to become independent; and, later on, sought to prepare the smaller colonies for full independence by granting them associate statehood status (semi-independence) with her.

Britain ignored the pleas of the Anguillian people who resisted the idea of being forced into semi-independence with St Kitts-Nevis, knowing full well that any so-called protection from Mother Britain would be lost forever, once that D-day in February 1967 arrived.

And, so it was that, on February 27, 1967, a few protesting islanders disrupted the Queen Show celebrations organized by the central government to mark the start of semi-independence. There was a general feeling of joy and happiness among the islanders, even though many then saw it as an unplanned, last resort demonstration of defiance on a part of a determined few. The islanders were quite clear as to the cause of their disenchantment.

The actions of February 27, 1967, initiated a movement which resulted in the ultimate act of defiance on May 30, 1967 – the deportation the police force – which had increased to a reported 17 officers from the regular 5 or 6 to stem the rising tide of resentment. Caught by surprise, the officers were hurriedly expelled by air after having their weapons seized.

Every year, on May 30, Anguillians celebrate the eviction of the St. Kitts police garrison; the unofficial separation from the tri-state; and, the defiant stand against the feared distant dictator; but, also, their own brave and courageous actions that ended the yoke under which generations of islanders had struggled to survive.

The Anguilla Act 1980 officially separated Anguilla from the semi-independent nation of St. Christopher-Nevis-Anguilla. It actually froze Anguilla into associate status (semi-independence) with Britain, though the islanders seemed to believe the relationship was that of a Crown colony.

May 30, 2017, we celebrated the 50th year since the expulsion of the St. Kitts police. Anguilla has come a long way in 50 years; however, there is still much room for growth and development. What odds will Anguillians defy, once again, to take Anguilla into the future?

Tags:What We Do In Anguilla 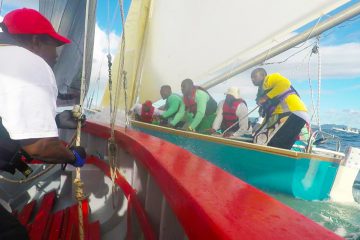