THE VALLEY, ANGUILLA–(Marketwired – May 13, 2016) – The secret is out — the stunning beaches and azure seas featured in the all-new unscripted dating series “COUPLED”, is none other than the alluring Caribbean destination ANGUILLA! The series, produced by Emmy Award winner Mark Burnett (Survivor, The Voice), will premiere Tuesday, May 17 (9:00 – 10:00 PM ET/PT) on FOX.

Tucked away in the northern Caribbean, the captivating island of Anguilla has long been the region’s best-kept secret. That is all about to change with the broadcast of this unique dating series, which was filmed entirely on location in beautiful Anguilla. Hosted by entertainment personality Terrence “J” Jenkins, COUPLED follows 12 single, smart and young professional women looking for love, who will meet face-to-face with eligible single men against the beautiful backdrop of the Caribbean island. Instantly, the women decide if they feel a spark of chemistry and want to spend more time with each guy, or if they don’t feel a connection and want to wait for the next guy. The real soap opera unfolds as new couples are formed and have to discover whether or not they have the compatibility to make their relationships last. COUPLED will also feature the one thing that all modern romances have in common — texting. The women and men are armed with cell phones throughout the series, giving the audience a front row seat to the real drama, as their text conversations pop up on screen.

“The decision to make Anguilla the destination of choice for this major network television production represents a tremendous vote of confidence in our island,” said Anguilla’s Chief Minister, The Hon. Victor Banks. “A prime time, network television series is an unparalleled opportunity for a destination, on many levels. It also gave a significant boost to our local economy, as the influx of personnel and increased purchases of goods and services provided a revenue windfall to both the public and private sectors,” he continued.

Anguilla will take full advantage of this unique opportunity, focusing on the New York metro area, the island’s largest source market for visitors. An on-air broadcast campaign with WNYW-FOX5 NY will run from the premiere on May 17 through the series finale, tentatively scheduled for July. The on-air campaign will be complemented by a digital promotion, comprised of video postcards and sponsored content.

A sweepstakes competition will allow viewers the opportunity to enjoy the “COUPLED” experiences in Anguilla, and for those not fortunate enough to win, special packages will be available.

“As the setting for this new romantic television reality series, Anguilla will receive a level of exposure that we could never afford to pay for,” said the Hon Cardigan Connor, Parliamentary Secretary in the Ministry of Tourism. “We intend to fully capitalize on this remarkable opportunity, by reinforcing the message that Anguilla is an amazing destination for making that special connection, and ensuring that our potential visitors know how easy and affordable it is to come to Anguilla,” she concluded.

COUPLED is produced by MGM Television and Grandma’s House Entertainment. The series is created and executive-produced by Mark Burnett, Tom Shelly, Ben Newmark, Dan Newmark and Larry Barron. MGM serves as the international distributor of the series. “Like” COUPLED on Facebook at facebook.com/coupledfox. Follow the series on Twitter @CoupledFOX and join the discussion using #Coupled. See photos and videos on Instagram @CoupledFOX.

Tucked away in the northern Caribbean, Anguilla is a shy beauty with a warm smile. A slender length of coral and limestone fringed with green, the island is ringed with 33 beaches, considered by savvy travelers and top travel magazines, to be the most beautiful in the world.

Anguilla lies just off the beaten path, so it has retained a charming character and exclusivity. Yet because it can be conveniently reached from two major gateways: St Martin and Puerto Rico, and by private air, it’s a hop and a skip away.

Anguilla is the answer.

Grandma’s House Entertainment (GHE) was founded by brothers Dan and Ben Newmark and Adam Bold. The company develops and produces unscripted television formats with a focus on comedy, game and social experiment, and has multiple scripted comedy projects currently in various stages of production. GHE is represented by Creative Artists Agency (CAA). 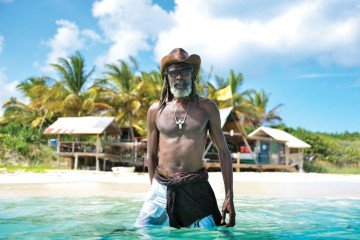