Well, ‘Onyan’** Chopped onions can cause tears to roll down one’s cheeks but this ‘Onyan’, along with some Burning Flames, and the local, legendary band, North Sound Brass International, could only have caused tears of joy at the August Thursday Beach Party.

Down on Meads Bay!

Ignited by the community spirit, the mesmerising Meads Bay became the place to be after noon on August Thursday. August Thursday is the national holiday on Anguilla which is always the first Thursday after the first Monday in August. For those of you who missed out on the first part of August Thursday, read Eyes Wide Shut for more.

August Thursday, just like August Monday, has a cultural and historical significance in Anguilla. It was a day which had originally gained its popularity from boat races (Class A and B) and later on, entertainment on the beach at Meads Bay. It has now become a vibrant ‘beach party’ with live entertainment and a wide array of food stalls to occupy those on the beach whilst the boat races are taking place.

The West Fest Committee, who produces the beach party, works to foster a conducive environment for the national sport to thrive as well as to attract spectators to follow the races – a favourable marriage of the boat racing sport and beach entertainment like at the August Monday Caribbean Beach Party.

Let the people have FUN! Nostalgic but exhilarating sounds emanated from around the small stage – stimulating members of the audience to gravitate to the stage. Front and center were those who came out to party! They exuded the spirit of carnival – full of merriment, a care-free atmosphere –  whilst grooving non-stop to the mixture of old school and new generation music. Irrespective of the style of music or which generation it came from, they never missed a beat!

Flames on the Stage

The older generation in the audience showed up and showed us, young ones, how it’s done!

Just imagine two bands of similar nature, the Original Burning Flames (from Antigua) & North Sound Brass International, who were in their prime in the 1980s/1990s and they still HAVE IT – the energy, the high calibre performances and the capability to be so enthralling.

Their excellent track record and their remarkable musicianship earned them respect from the audience and had a positive effect on the crowd. If they weren’t singing along, they were dancing or BOTH!

From zouk to cadence to soca, their delivery of music that everyone could appreciate, heightened the enjoyment of the beach party.  There is no questioning that these bands – who have been entertaining their home countries and the region for over 30 years – and their music have a tremendous, lasting impact on all those listening. Old school music really SWEET!

Kaleidoscope of Kolours - Anguilla is MAS! 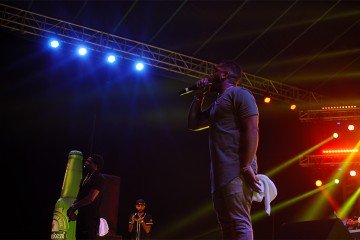