Miggy Llorera / April 1, 2017 / 3k
1
Miggy Llorera 2017-04-01
Your reach should exceed your grasp, Or what’s a heaven for?”
— Robert Browning
Twenty hours of work and four hours of sleep and she would not have it any other way! Twenty-two year old Deanna Mussington X-Factor contestant from Anguilla, with a passion for singing, expressed that she knew she was a singer from the womb and she will be until in the tomb!

From as young as the age of three, the stage was hers – eager to get a hold of the microphone and owning it just like her performances today. That’s the power of the arts — to intricately understand the struggle and the achievement.

Her Source(s) of Inspiration

Hereditarily, Deanna is a born singer; it’s in her blood! That angelic voice was bequeathed from her father’s side of the family, namely, The Mussington Brothers – a group of brothers united in 1989. Their music was a sweet blend of calypso, zouk, merengue, and reggae, just as Deanna’s music! She, without a doubt, followed in the footsteps of her relatives. She was pushed by her uncle, the late Dexter Mussington, who stood as the main inspiration throughout her career.

Equally important is how much she looked up to persons like Whitney Houston and Celine Dion, who we all know to have the “Midas Touch” when it comes to performing. Moreover, today’s artists of substance namely J.Cole, Kendrick Lamar and Jhene Aiko play a significant role in inspiring the lively soul, Deanna Mussington, to produce substantial lyrics.

Deanna Makes it through to 6 Chairs

It was her dream to be in a competition as large as X-Factor. Now, the opportunity has presented itself, and, the dream will become a reality. But, the road to X-Factor U.K. wasn’t and still isn’t easy. Artist development is the growth of the artist in the light of her fans. This is critical but, of course as a driven young lady, she still brings her A-game. People are often clouded by the glitz and the glamour of what’s portrayed through screens and disregard, or are unaware of, the trials on the path to success.

Traveling and rehearsals consume significant amounts of her time and energy and, foregoing sleep for the sake of the dream is a regular. But, staying healthy is especially essential in everything and so, the gym is also included in her schedule.

For Deanna, the challenges help to keep her on her P’s and Q’s and also contributes to her powerful performances. Despite the obstacles, as cliché as it is, the victory is definitely sweeter than the struggle. Just look at this…

How did she arrive to this point?

In 2014, Deanna was introduced to her current manager, Mr. Ivan Berry, who is the Head of Artist & Repetoire for Sony/BMG. Deanna and Ivan opted to make melodious musical magic and share it with the world as a unit with the use of her spectacular voice. Effortlessly, they continue to win.

Some may perceive that there are limited opportunities in Anguilla due to its economic size, but this young lady made it happen for her by doing what she loves! Deanna, being her true self; performing, singing her heart out, enjoying life and slaying the game captured the attention of the X-Factor U.K.’s team. In December 2016, they called Ivan Berry to express their desire, as a result of her powerful voice that resonates, to have this young lady a part of their show.

As good things come to those who wait, Deanna will be leaving Anguilla to go to the U.K. on May 20th, 2017 and auditions begin May 27th. She will return home then subsequently, Anguilla’s princess of pop will return to the U.K for three (3) months to develop a European fan base until it’s show time!

But, what’s her purpose?

When asked “Why is singing her passion?”  Deanna genuinely responded,

“I do it for me! I do it for the people who care for me — my fans, my parents but mainly for myself.” She exclaimed how much she loves everything about her career and her ‘worst’ days are “leg days” at the gym.

The singer/songwriter has a lot in store for her Anguillian and international fans. The modern-era is Deanna’s push to re-establish soulful and meaningful music. Her 2017 releases will depict more insightful views of her experiences and inspirations in her years of living. Eye-opening experiences and opportunities via travelling is essential; you can travel, and you can explore, this opportunity will allow Deanna to explore vastly.

In years to come, Deanna’s aspirations aim tremendously high. She intends to return home to assist the hospital and give back, develop her own widespread fan base, touring, and all the perks of being as talented as she is. 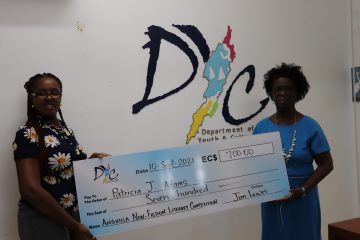