What do a firefighter and a chef have in common? They both have to deal with heat. It is not every day a firefighter may have to out a fire, but indeed every day a chef must face the fire and feel the heat in his/her kitchen.

This is the life of Sheldon Browne, former firefighter of 21years and now Chef. It may not be a surprise to many that Sheldon is a Chef coming from a family that cooks and bakes. Mrs. Chelsea Browne, his mom, is well known for her tarts, potato pudding, black cakes and other delectables.

Just this past Christmas, within two days, mother and son produced nearly 100 tarts and over 30 cakes such as carrot cake, red velvet cake, and many other assortments.

“I love baking with my mom during Christmas time. There is a connection between us,” he told What We Do In Anguilla – WWDIA. “No need for words. She knows exactly what I would do. She knows my skill sets.”

Attending the Culinary Institute of America

Sheldon enjoys baking and cooking. His skill was first recognized when a friend asked him to bake a cake for a guest at the former Viceroy Hotel. The guest was so impressed by the cake that he requested to meet with Sheldon. Upon their meeting, the visitor suggested to him that he should attend the Culinary Institute of America – CIA, in New York.  At that time, Sheldon was not in a financial position to attend the school. While he applied in 2008 and was successful, it was not until a few years later, in 2014, that he made the decision to attend CIA.

Sheldon graduated with a Bachelor of Science in Culinary in 2018.  He also had the opportunity to be a personal chef for someone in New York, however due to his father’s illness at the time, he returned to Anguilla in 2019.

“Failing was not an option for me,” Sheldon told WWDIA. “In my head, I was representing my country. So I showed up and showed out.”

Despite funding himself in school with no government assistance, Sheldon set on his journey to promote Anguilla. He promoted Anguilla through his culinary cuisine and spoke about the island to many of his colleagues, friends, politicians and strangers who were always impressed with his delicious Anguillian/Caribbean food.

“Everyone wanted to know where I learnt to cook and bake, and why I was there,” he stated. But culinary is so much more. I didn’t know how to create a menu, I didn’t know how to do stock invention, I had to learn various aspects of culinary, the front and the back – the dining area where guests ate and the kitchen where the food is cooked. I had to learn… I got a full insight in the culinary field.”

Cooking for celebrities and dignitaries

Being a student at the Culinary Institute of America, one of the top Culinary schools in New York, which has the largest staff of American Culinary Federation Certified Master Chefs, Sheldon and the other students got the opportunity to cook for celebrities and other distinguished executives and sporting teams.

Sheldon recalled cooking for former professional basketball player, Shaquille O’Neal, and described it as one of his favorite encounters, “A very down to earth person, one of my favorite persons, I’ve met.”

The Anguillian chef also had the opportunity to cook for Rapper and chef, Snoop Dogg and the Philadelphia Eagles.

One notable moment, Sheldon recalled was cooking for an elaborate function that included US politicians, like Ras Jua Baraka, Mayor of Newark, New Jersey and Keisha Bottoms, Atlanta Mayor.

He said the menu at the function included Caribbean food such as oxtail, dumplings, provisions, pigeon peas and to his surprise fish from Anguilla! The Culinary Institute of America – CIA procured red snappers from Anguilla! He did not know this until they told him. Sheldon always spoke highly of Anguilla and to know that the CIA procured fish from his homeland warmed his heart.

Sheldon’s cooking not only intrigued his colleagues but guests as well. He said Ms. Bottoms enjoyed the oxtail and fish so much that she came over to meet him and they had a lovely conversation.

“I have a love for food, it’s always there,” he said smiling. “There is a connection with food and people.” This is certainly true as Sheldon has met and connected with many persons during his time in the US.

He spoke of an opportunity to work for someone, as his personal guest. Through Sheldon’s conversation and learning about Anguilla, the gentleman ordered a batch of crayfish from Anguilla for one of his events.

Sheldon promoted Anguilla and many persons got to know about the island’s cuisine.

Other foods also attract the 6 foot plus chef. He expressed his love for Asian food.

“I love the beauty of the Asian food, it is quite vibrant. But Caribbean food is one of the best in the world, so I like to mix it with the Caribbean flavor – Asian Caribbean fusion,” he laughed. “Being a chef doesn’t put you in one bracket.”

Some of Sheldon’s travels include Singapore and Malaysia. He also intends to visit the Philippines in the near future.

With his love for food, WWDIA asked the Anguillian chef what are some of the weird foods he has cooked.

Sheldon also enjoys charity work. “This is one of the things, I missed most about my time at the school. Cooking for the veterans and the homeless. Their stories are sad and amazing.”

The COVID -19 pandemic has delayed Sheldon’s return to the US. He is currently assisting a young man in operating his business in Island Harbour. Sheldon cooks at Pelican’s Restaurant. Many persons flock to the eatery to taste some of the delicious seafood there.

“You taste the beauty of the food, when the person loves doing it,” he said.

Sheldon definitely enjoys cooking, and his homemade and exquisite dishes keep persons asking for more, as he continues to feel the heat in his kitchen.

Ms. Felicia Hennis has a Bachelor of Science in Interdisciplinary Studies with a focus on Communications from The New York Institute of Technology. She is an avid reader and loves travelling. 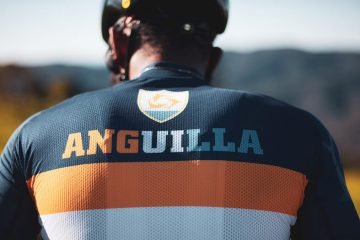 Are you riding with Hasani?