Warmin’ Up & Winin’ Down at FLOW Soca Rave The first competition after the official opening ceremony of the 2017 Anguilla Summer Festival, FLOW Soca Rave, set the tone and bolstered the high anticipations of the revellers for the Carnival season!

Culture definitely reigned supreme with high energy performances, crowd-pleasing and the generally astounding stage presence! To say the least, it was EPIC – the perfect warm-up for the fêtes and events to follow!

From start to finish, the two-part competition was one that deserves rave reviews! Hands down, there was stiff competition and accordingly, the 14 performers gave their absolute best.

Highlights of the Night

The Host with The Most

The multi-talented, dynamic host, DJ Jeanie, is worthy of all those adjectives! He made it his business to establish crowd engagement from beginning to end. Maybe, he’s a soca hype man?!

Surprisingly, in addition to being the host, he was a captivating entertainer – performing along with one of the contenders as well as one of his singles during an intermission, he beatboxed, deejayed and danced.

What’s a musical performance without accompaniment? The inclusion and selection of skilled band members – tasked with providing accompaniment for the contenders – were the icing on the cake.

Paired with the riveting deejay, the band was a force to be reckoned with. They exhibited their ability to improvise to ensure that there was no event that the audience was not entertained. In my opinion, the band’s performances represented their praise-worthy aptitude as musicians. We all can imagine that being the first performer for a competition can be nerve-racking. Not to mention being a first-time performer in a competition with seasoned veterans! Nonetheless, the exuberant novice, Big Rash, straight outta Highland (Island) Harbour, served to be a testimony of emergence despite the odds.

Think of the questions in the minds of the audience before he hit the stage, “Will he fold? Or will he deliver?”. He sure did DELIVER! Ultimately, he captured a crown for both categories – Power & Groovy Soca.

Enhanced with Dance and Much More!

Some of the contenders decided to keep it simple but the others… went ALL out!

From back-up dancers to props on stage to fireworks to confetti to grand entrances to eye-catching costumes/wardrobe… the WHOLE works!!! The glitz and glamour added to their overall performance and the excitement of the crowd. To top it all off, there were spectacular guest performances by soca veteran Luta, “D Crowd Motivator”, and the young soca star and 2017 St. Maarten Groovy Monarch, Kenyo Baly – most popular for his single, “Who Yuh Fuh”. Which type of soca do you prefer? Groovy or Power? Let us know in the comments.

Warmin’ Up & Winin’ Down at FLOW Soca Rave 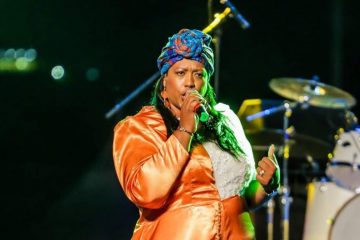