US$450,000 awarded to Anguilla’s Department of Fisheries and National Trust to study sea turtles

In late April 2016, European Union’s Voluntary Scheme for Biodiversity and Ecosystem Services in Territories of European Overseas (BEST) confirmed funding to the Department of Fisheries and Marine Resources (DFMR), the Anguilla National Trust (ANT), and the University of Roehampton (United Kingdom). The 394,976€ (approximately US$450,000) grant to the two agencies will be used over a period of three years to study in depth sea turtle population dynamics, ecology, and movements in order to provide the Government of Anguilla and local communities with objective information about their habitat use, breeding biology, population status, and threats.

The project, led by DFMR in partnership with the ANT, the University of Roehampton and with technical support from the Wider Caribbean Sea Turtle Conservation Network (WIDECAST) represents the most significant direct investment in Anguilla’s sea turtles to date. It, however, builds upon work conducted by all of these agencies since the 1995 introduction of a moratorium on the harvesting of sea turtles and their products.

Three species of sea turtle forage and nest in Anguilla: the globally threatened Hawksbill, Green, and Leatherback. These species rely on the island’s coral reefs, seagrass beds, beaches, and coastal vegetation to support their foraging and nesting behaviour. They are also an irreplaceable ecological resource and a key indicator of coastal resource health. The presence of foraging and breeding sea turtle populations is indicative of healthy coral reefs, seagrass beds, and beaches. In turn, these ecosystems provide vital services as coastal barriers, as well as sources of commercial and non-commercial fish species, materials of medicinal value, and sand. For Anguilla, whose main tourism draw is its beaches, protecting the integrity of this habitat for sea turtles also means protecting the most significant indirect contributor to the island’s Gross Domestic Product.

After hundreds of years of over-exploitation throughout the Caribbean Region, the Caribbean’s sea turtle population size and range has decreased significantly, from millions of individuals to only a few thousand within the entire region. While the Government of Anguilla took the much-needed critical step to protect Anguilla’s remaining sea turtles through the creation and extension of the moratorium to 2020, DFMR, the ANT, and partner agencies, the University of Roehampton and WIDECAST have recognized the need for direct evidence in changes in sea turtle populations and for objective data to inform their management and conservation post-2020.

Activities planned under this European Union-funded three year project include: identifying and assessing foraging and breeding sea turtle populations and the habitats that they use through a capture-tag-release programme and the attachment of satellite loggers to track their movements; identifying potential threats to sea turtle survival and identifying possible mitigation strategies; developing a framework for guiding sea turtle conservation action and recovery; and building national and regional awareness and support for sea turtle and coastal conservation.

The announcement of the funding occurs at the beginning of Anguilla’s sea turtle nesting season which began on a high point with a rare middle-of-the-day nesting attempt made by a Leatherback sea turtle on one of Anguilla’s mainland beaches only two weeks ago. The largest of all species that nest on Anguilla’s beaches, the Leatherback turtle left tracks over six feet wide on the beach. The attempt was respectfully witnessed by dozens of Anguillians and tourists who were in awe of its size and grace.

The public is encouraged to continue to report nesting sea turtle sightings to the Anguilla National Trust by calling either 497 5297 or 584 2173. For more information about the European Union-funded project, individuals are asked to contact the Department of Fisheries and Marine Resources at 497 2871 or email fisheriesmr@gov.ai. 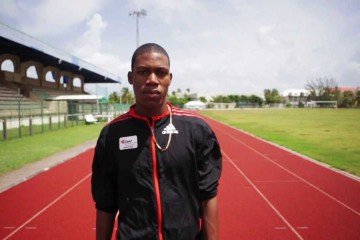