Ariel Bushay / March 17, 2017 / 1.8k
0
Ariel Bushay 2017-03-17
The Dune was named by CNN as one of the best and craziest beach bars in the world! Moonsplash is in the top 10 best and craziest parties in the world!”
— Dr. Linda Banks
Bankie Banx, the man with the plan! Back at it again with one of Anguilla’s major outings! Small island, big event! Anguilla continuously expresses its musical talent through mind-blowing events and performances. March 10th-12th; three nights of soulful music, good vibes and the chill ambiance! The Dune Preserve celebrated its 27th annual Moonsplash hosted by our very own, Dr. Linda Banks!

Up the steps of Planet Dune’s highest point, inhaling the good and exhaling the bad, taking in all the surroundings of what Mr. Bankie Banx had to offer! Your eyes wandering over the many people in VIP and on the bottom floor. The Dune has lots of corners; like a big ‘ole playground. But, you better believe that every time you look up, it’s the stars and the bright moon you’ll see!

Full Moon on the Friday!

It all shelled down at Planet Dune! Swaying to the vibrations of Johnny Springer and The Overdrive String Band of Anguilla, the audience felt the mellowness of the music as they sang along. Moreover, lifting the crowd’s energy and completely altering the genre to a more upbeat, more youthful tone was JR DALION accompanied by Busta and Akio Lloyd! Their spirit lit up the stage as thriving local artists shooting for the stars.

The night was filled with the smell of ital soup and barbecue. As tourists from all parts of the world joined Anguilla in a musical frenzy, the night was deemed as a place where any and everyone was welcomed; despite their cultural background. Perpetuating the night with soulful lyrics and melodious vocals, Anguilla Music Academy’s mastermind, Darius James, took the stage along with the band True Intentions and pumped up the audience with their buoyancy and his interactive approach as he said to “come a little closer”. His energy emitted through the microphone and quickly into the body of people as evident in how swiftly they moved forward and grooved to the rhythm!

As we “Move On” to Omari Banks, the son of Bankie Banx performed with the same zing as his father. His perfect combination of the guitar and his voice relaxed the crowd; holding their partners closer as he sang “Unafraid”. Bankie later accompanied his son; it was indeed a sense of serenity that resonated from the duo and permeated the atmosphere. It was different; a different planet, self!

It was that time of the night, the main act, Romain Virgo, definitely delivered as the “Soul Provider”. Being asked to perform an “Encore” at Moonsplash – with the first time being in 2012-  there had to be something the production team saw in him that was just simply “Beautiful”. It was about 3am. You’d expect persons to be dozing off by then, right? SIKE! Their liveliness was booooming! Never did it lessen!

Back at The Dune! After an exciting and thrilling night, it was time for part two. Kicking off with Omalie 360, who showed up and showed out! So, said, so done! Following the band was the one and only Sheriff Bob – the mastermind, along with Bankie, who was behind the greatest music-filled beach party in the region. His performance was unique and definitely meaningful especially to the Banks’ family and the lovers of Moonsplash.

At this moment, Moonsplash became 10 times more interesting. A gesture was made by the youngest son of Bankie who skateboarded onto the stage introducing his father’s performance along with his eldest son, Omari Banks, who played the guitar. Together, they consolidated the Dynamic Duo of the night. Bankie’s sweet voice accompanied by Omari’s plucking on the strings of his acoustic guitar made the rhythm even more soothing. “Two generations, One stage!”

“We’re gonna make loooo-ooo-ooo-oovvee under the ‘moonlight’!” Here comes Christopher Martin making harmonious love to the ears of numbers of ‘Chris-fanatics’ in the crowd. If the Moonsplashers didn’t know him then, they surely know him now! Stretching his arms reaching for the audience, his interaction was ‘on-point’. The transition from tempo to tempo could have swoon any lady. The audience could not have stayed still. The woozy ones were on their best behaviour as the energy of the party suited their composure.

After two great nights of music and “sinsemilla”, the Sunday was the “chill day” on the beach. Opened to all persons; tourists and locals! The aura was still set and welcomed persons from all corners of the island. For the final acts of the whole blockbuster, there were performances by the various 2017 Moonsplash cast along with Johnny Springer and The Overdrive String Band and a Guest Chef from Sunshine Beach Bar & Grill, Nevis. Everyone mingled with one another and the relaxation of the day brought the 2-day escapade under the moon to a graceful end with the splendid fusion of relaxation and pleasure on Rendezvous Bay. 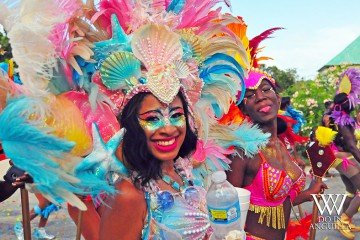