When you hear the name Queen B, you quickly think calypso but the “B” is “stinging” quite differently with her first-ever Soca song, For You.

Released on September 7th, the songstress has received accolades from regional and international countries.

“I have received calls from St Maarten, St Kitts and even from the United States. I have been approached to push my Soca track more in the US.“

When asked, why did she decide to do a Soca track, the 6-time Female Calypso and a former winner of the National Calypso Monarch said, “I wanted to do something different – something new and I’ve always look up to people like Singing Sandra, Alison Hinds and Calypso Rose who is also a Soca Queen.”

She further stated, “Sometimes when you listen to Soca, you hear words like “push back” and so I wanted to target a more mature audience”. For You, the Soca groovy song, speaks to her love of Soca music. The song personifies “Groovy” as a male who gives her a good whine each time they meet. She also speaks to the rush she gets when she sees “him” and like a true fan, she would always be by the stage waiting for him.

The stage will always be home for Queen B. In a male dominated field, she is a force to be reckon with, and has garnered the respect of her competitors. She has represented Anguilla in Montserrat, Trinidad, Barbados, the USA, St Eustatius and Canada.

Her deep love for Calypso

In 2014, Queen B was awarded Best Female Calypsonian of the Year at the Anguilla Music Awards. In 1995, she was crowned the first, Ms CCB Talented Teen.

Queen B is admired by many as she helps to mentor young people who are interested in calypso. It is no surprise that the musical bug has caught on to her 3 daughters who have competed in junior calypso competitions.

What’s next for The Queen

When asked what’s next, The Queen said she intends on releasing more Soca songs and plans to participate in the Flow Soca Rave competition.

Flow Soca Rave is one of the most highly anticipated carnival shows on Anguilla’s Summer Festival roster. This competition consists of some of the heavy hitters like her sister Roxxy and their cousin “Big Rash”. Having Queen B in the mix will no doubt create a buzz. The sisters have competed against each other in calypso competitions and, in recent times, their other sister, Calypso Ro, has entered the mix.

The Webster sisters as they are called have their biggest supporter- their dad –Roland Webster who has supported his daughters.

Queen B is known for her hit songs Burning Issues, Woman Power, Circus, Diary, Victorious and Share A Little Love.

She recently did a collaboration – WE GOT THIS, written by Water Street Boyz from Barbados. The song included regional artistes highlighting the unity and strength of the Caribbean region during the COVID-19 pandemic.

Queen B’s soca track, For You, was written by Jamaal Miller of Seven Flags Creative Group; Background vocals by Peter “Wildfire” Noel; Produced by Willow an Anguillian who is a Producer in the UK; Recorded at Nocturnal Studio and Mix and Mastered by Sir Funk Gumbs from St Maarten.

Ms. Felicia Hennis has a Bachelor of Science in Interdisciplinary Studies with a focus on Communications from The New York Institute of Technology. She is an avid reader and loves travelling.

Tonya Mason receives a PhD in Epidemiology from Hong Kong 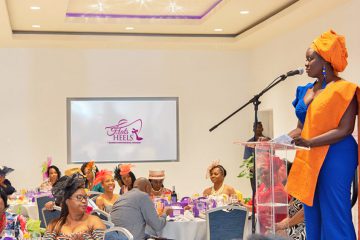