Die-hard fans of the Anguilla soca band culture would quickly “jump on ya case” and explain that this revered competition is more than band members’ ability to simply sing or play to a riddim. It is the true test of musicianship and also serves as a showcase of the various Anguillian soca bands.

The now popular soca band competition is said to have sprouted from a music competition called “Starfest” held in October 2003 which featured two young bands from the local high school.

Almost 14 years later, it is heart-warming to witness bands consisting of the young and not so young, on stage, performing and showcasing their skills and talent.

More Technical Than You Know

For this three-part competition, band members must display their musical competence in melodic development; re-harmonization; creativity; the ability to transmit the essence of their songs; crowd impact and their overall stage presence.

In relation to the judged segments, each band was given 15 minutes to set up onstage – failure to do so would result in a deduction of points from their overall score.

Then, they were given 35 minutes to perform: rendering their own songs (Bandclash segment), a preselected test tune (Bandorama segment) and one of the participating bands’ songs (Soca Toss Up segment) – the same penalty applied.

What was different this year?

To kick-off the night, there was an addition to the previous line-up entitled the Perfect Mix – a non-judged segment implemented by this year’s event sponsor, Coors Light. This new segment comprised of the random selection of band members from the participating bands to create an impromptu band to perform a predetermined song. It was a clear illustration of the unification of people through music.

Over the past year, there was the formation of three new bands: Session Band dubbed “the youngest band with the freshest sound”; the vibrant Synergy, as well as Frontline Squad, a band which consists mainly of teenagers (however, they did not participate in the competition).

Most artistes and bands may say that Anguilla’s audience is one of THE toughest crowds to get participation from and, that’s part of the judging criteria. So… if persons get up to dance or wave or sing along, moreover, run eagerly to get closer to the stage, it is only one thing you can conclude, that BAND can PERFORM!

I hope you didn’t miss Exodus HD’s entrance and their inclusion of reggae… “Exodus, movement of Jah people!” Or, Session Band and their scratch band rendition. Infusion XL took us back to music class as they opened with a recorder “ensemble”. And, Synergy introduced their yellow dancing mascot!

First time Soca Bandclash & Bandorama contenders, Session Band placed second for the Soca Toss Up segment and Exodus HD placed second for Bandclash. And, once again, Infusion XL prevailed as Champion of all judged segments, having done so in 2016 – making this their 2-peat.

Question: Do you know why persons use the title “Daddy”, followed by a nickname, to refer to members of a band?

Let us know what you think in the comments below!

“Art. Passion. Life. Art is my passion and that passion guides me through life”, this is the personal mantra that drives Ms. Tangiera Huggins, a young and upcoming artist.

Tonya Mason receives a PhD in Epidemiology from Hong Kong 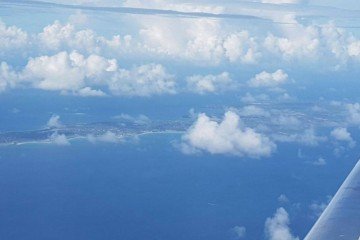