Some trees were bending while some trees were snapping apart to allow the powerful wind to pass through. Trailers sailed aimlessly through the angered grey sky, landing in places they were not in in the first place.

Cars were moving around recklessly as if invisible people ‘bought their license’, so my mother would say. What was once cable poles were made into obstacles that cars had to avoid while driving after the storm.

People’s galvanized rooftops were now sharpened knives cutting whatever was in the way. September was definitely not a good month for us. And surely not the month to return to school.

September 6th, 2017 was a horrific day that Irma had hit Anguilla. Some days before the storm, my family and I visited the store to get cases of water and when we got there the store was overcrowded with people.

When I got to the aisles with water, I realized that there was only one left, I felt like crying when I was literally a second late when a man came and took it. “Hey miss, do you have water?” The same man that took the last case of water had asked us when we were leaving the store, we said no and he came over and placed two cases in our car. We were so grateful. He told us “I bought most of the cases so that people can have one for free, gotta help people out you know?”

The neighbors helped us willingly to nail wood over our windows before the storm came. When the storm came It was sheer terror. The wind was howling as it tried to get inside through the doors and windows and the trees begged for mercy as they bent and broke. Debris flew around as if an ill-tempered child had thrown a tantrum, throwing their toys around. “Anguilla won’t make it”, some said.

“There is a rainbow at the end of every storm”.

Within the three months that followed after Irma’s impact, we received relief from neighboring islands. The electric company had begun to put up new, taller and stronger poles.

It rained a lot so the grass was as green as ever and the trees were growing back healthy. Rainbows arched over the land showing us that there is goodness in every bad thing that happens. ‘“Anguilla won’t make it”, some said. The Anguillians proved those people wrong.

What I loved the most after the storm was that we put our differences aside and came together as friends, as a family and above all as a community to help one another. And that, my friend, is what I consider beautiful about Anguilla. 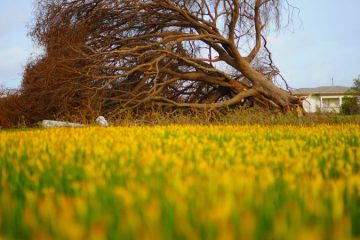